Mmm Pickled cabbage, it sounds nice to me but I have only ever had sauerkraut,so when my friend said he liked pickled Red I thought I would make some.
At the moment I am a pickling addict, so I have looked at lots of recipes on the internet & made up my own. Try using your imagination too don't cheat & buy ready mixed pickling spices, its easy to experiment & you can make one jar at a time using different combinations, just remember to write them on a label, so you know what works & what doesn't!
Pickling in Bulgaria is a little different as the vinegar (otset) here is not as strong. Basically its salad vinegar (cheap) or wine vinegar (more expensive). It can still be done & is just as good but it will have a slightly different taste.
Don't listen to anyone who says you don't need to let it mature a week or two, you do or the vinegar will be over powering & the flavour will not be steeped enough. 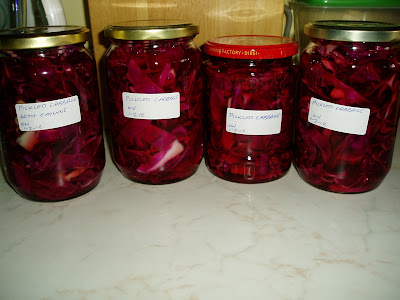 1 Head of Red Cabbage shredded. remove hard core (outer layers removed)
Salt
Layer the cabbage in a bowl, layer cabbage then salt till finishing with a layer of salt. Cover with a plate. After 24 hours wash off salt & drain well.
Pack into sterilised jars, push down well. 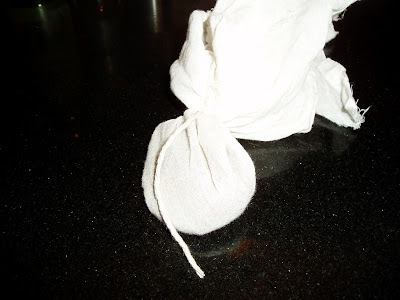 Add the bag to the vinegar, bring to the boil then simmer for 15 mins.
Remove from heat. Pour over cabbage while hot & seal, or you can wait till it is cold. Try both & see which you prefer.
Wait at least a week before eating to allow flavours to develop.
Great for the up coming BBQ & garden party season.

This cabbage needs to be in the jar for a week minimum,  two will be better.
Posted by Joanna newman at 11:44

Welcome to Joanna’s Easy food blog featuring recipes made from fresh home grown produce. Both traditional Bulgarian village recipes & some adapted recipes from around the world!All cooked in a Bulgarian village. I am not a chef I am not even a cook but I am someone who loves to make food, not fancy food just good wholesome fresh food & scrummy desserts!
The aim of this blog is EASY recipes. I am not a fan of the difficult & expensive as I find I am rather dissapointed in the results!
We can all cook from fresh we just need to get back to basics!
I live in a village here in Bulgaria & grow lots of fruit & vegetables on my property & love nothing better than cooking with them fresh from the garden. Most also get preserved for winter. I make & freeze recipes, compote fruit, make chutneys & pickle the rest. Since moving here I have succesfully made Jam for the first time ever. The villagers cook & eat what is in season & preserve hundreds of jars for winter. I am not a fan of fresh peas so will only eat frozen garden or petit poi but I know my friends have canned about 60 jars of peas alone to see them through. The villagers pickle & preserve everything even Goat! The green beans get preserved in can's for winter & I use them to make Bob later in the year. Also lots of salad is eaten as the lettuce & cucumbers are all freshly picked when needed from the garden chopped & mixed with oil, vinegar & placed on the table as a messe. The 2010 vegetables grown in my garden was Pumpkin, Cucumber, Lettuce, Peppers, Chillies, Garlic, Carrots, Beetroot, Walnuts, Hazelnuts, Figs, Apples, Grapes, 4 varieties of Plums, Sweet Cherries, Morrello Cherries, Pears & other fruits including Peaches. In 2011 I intend to plant more varieties of vegetables.
I am learning Bulgarian cuisine & will post recipes as & when I perfect them or get the villagers to teach me. It is near imposible to find recipes or a cook book in English.
Also we have lots of traditional English & recipe's mum has made into Reedman traditions from all her travels, which I make & adapt. It is sometimes hard getting the ingredients in Bulgaria for food made in UK so adaption is needed or, for instance, the Bulgarian rice is totaly pudding rice & I can't have success with it any other way so I have to pay a fortune for what here is specialist rice! Beef mince is very expensive, so I cook mainly with pork mince
Please leave comments I would love to know what you think & if you try a recipe let me know how it went, Good or Bad!!!!